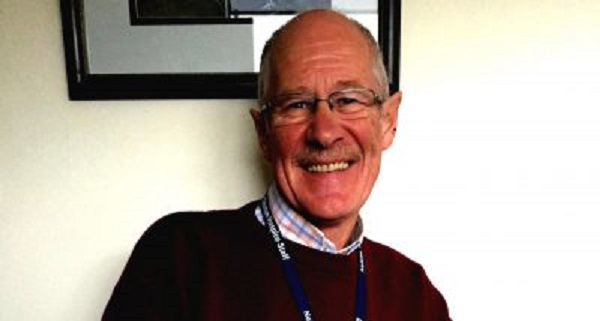 We’re so lucky to have David!
Hospice chaplain David Moynan says his role is to journey with patients, whether they consider themselves religious or not.
David, 65, has been the hospice chaplain, in charge of “family support and pastoral care”, for two years since emigrating from Ireland. There, and in Northern Ireland, he spent 35 years as an Anglican priest.
He and wife Isabel arrived in Nelson with no work planned. “I was very fortunate to see the ad (for the hospice position) in the paper.” They’d visited the region many times, as they have a son who lives in Tasman.
Now they make the reverse journey to see other their son in County Kilkenny, Ireland every year.
David says the work differs in that in the parish, he built up relationships over many years.
“This is much more focused on short term.” He also encountered a few cultural differences, particularly working within Maori and Asian communities.
But generally the job remained focused on relationships.
“Rapport is built up especially if you’re able to visit at home, to meet the family or their pet dog, or to see their vintage car. Those are the things that really make it.
“A lot of people say they’re not religious but we’re all spiritual. My job is to find out what’s important to them in terms of their spirituality, what makes them who they are and to work out how to best support them.”
He says his role crosses over with other hospice staff – social worker, bereavement counsellor and nurses – as everyone’s job is to find out people’s story.
“When you know the story you can respond appropriately,” he says. “You find out where they want to be treated, what sort of treatment is important for them, what’s their hope for what life is left for them.”
Outside of work, David enjoys gardening, home DIY and walking their bichon frise dog.
“I have a boat but I haven’t made time to go fishing. Painting weatherboards comes first.”
David sees nearly all patients who are admitted to the unit, and is referred by nurses to see people receiving care at home. His role is officially 25 hours a week and he’s always on call.
“I’m only occasionally called. But if you’ve made a relationship with someone, you can’t drop them in their time of need.”

*This column appeared in this week’s Nelson Weekly, whom we thank for the coverage.